Transport and assemble of the Miniatur Wunderland Walkway 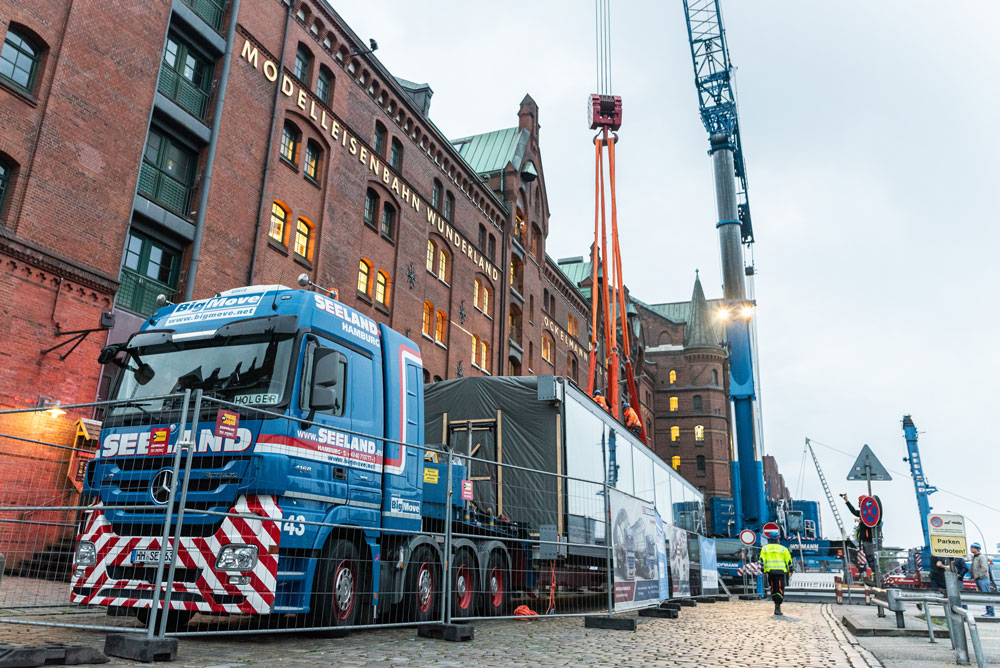 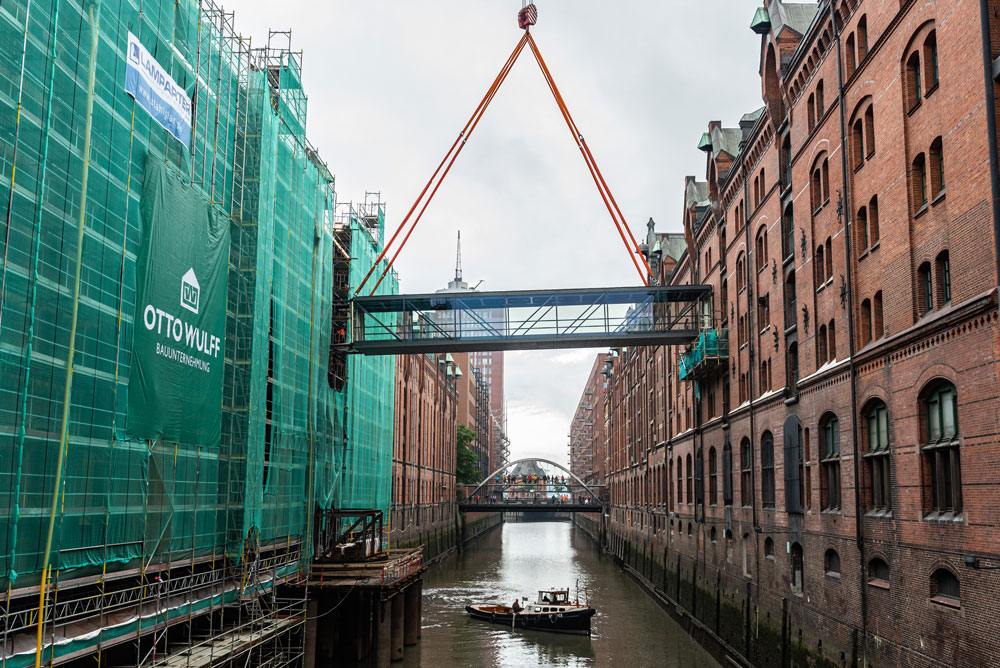 Transport and assemble of the Miniatur Wunderland Walkway

Gustav Seeland has been awarded a contract to transport and assemble a footbridge in Hamburg’s historic Speicherstadt warehouse district. The walkway will connect Miniatur Wunderland’s exhibition areas, which are located in two former warehouse buildings facing each other. The tourist attraction plans to enlarge its exhibition space and make it possible for visitors to access the two buildings via the new bridge. The steel-and-glass construction—which has been built by bridge specialist—measures some 25 meters in length and weighs 38 metric tons.

Gustav Seeland has been tasked with transporting the footbridge to the Speicherstadt warehouse district and installing it on-site, as well as with all logistics services connected with project execution. These included a feasibility study taking into account local conditions, the commissioning of geostatic reports, and the procurement of the permits required to transport the bridge.

A large, 750-metric ton crane—which itself needs to be erected using a 100-metric ton crane—will be used to assemble the footbridge. Seeland will be deploying twelve ballast vehicles, with a length of 18 meters and counterweights totaling 204 metric tons, to erect the large crane

Heavy Lifting for the Construction of the New Bille Bridge 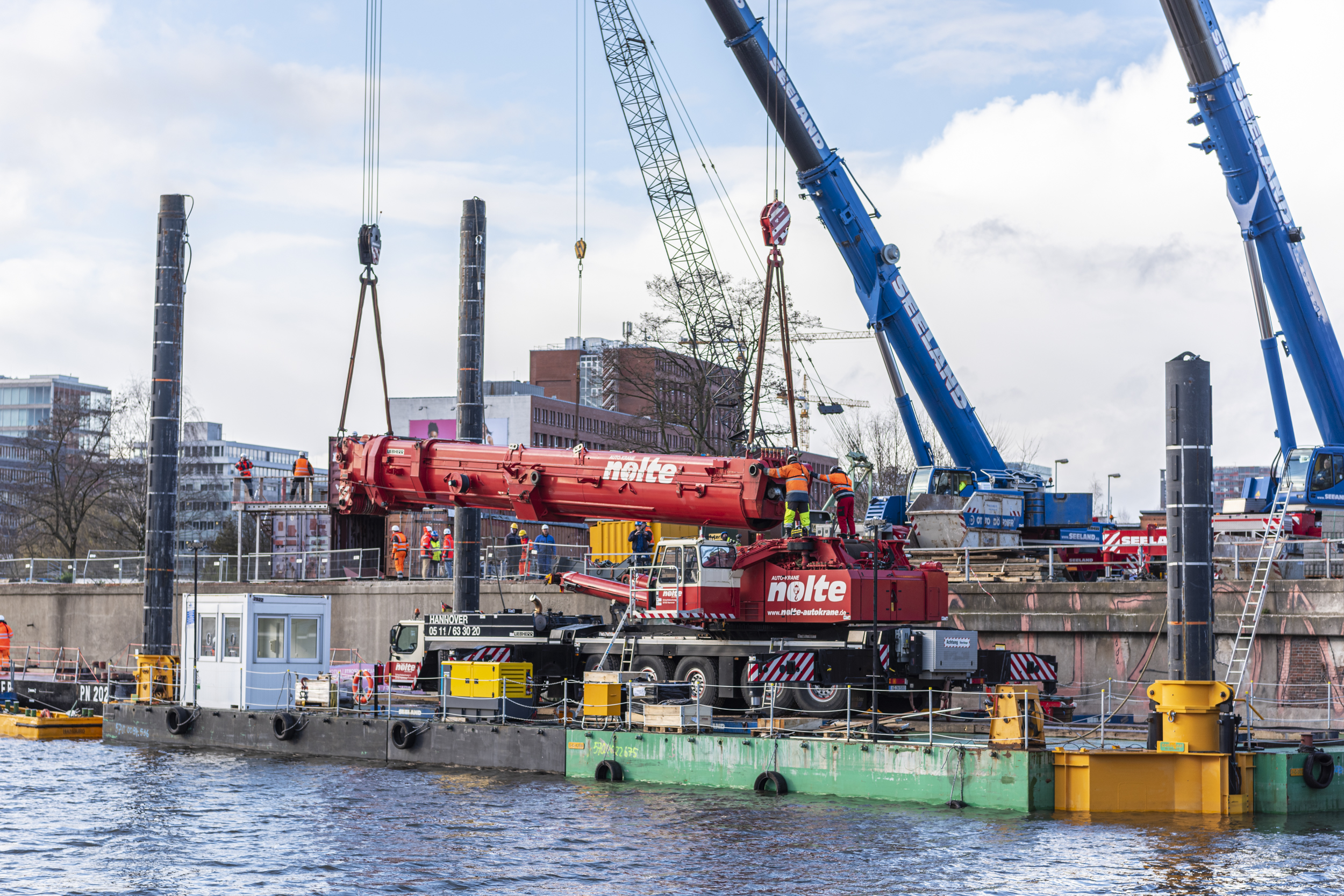 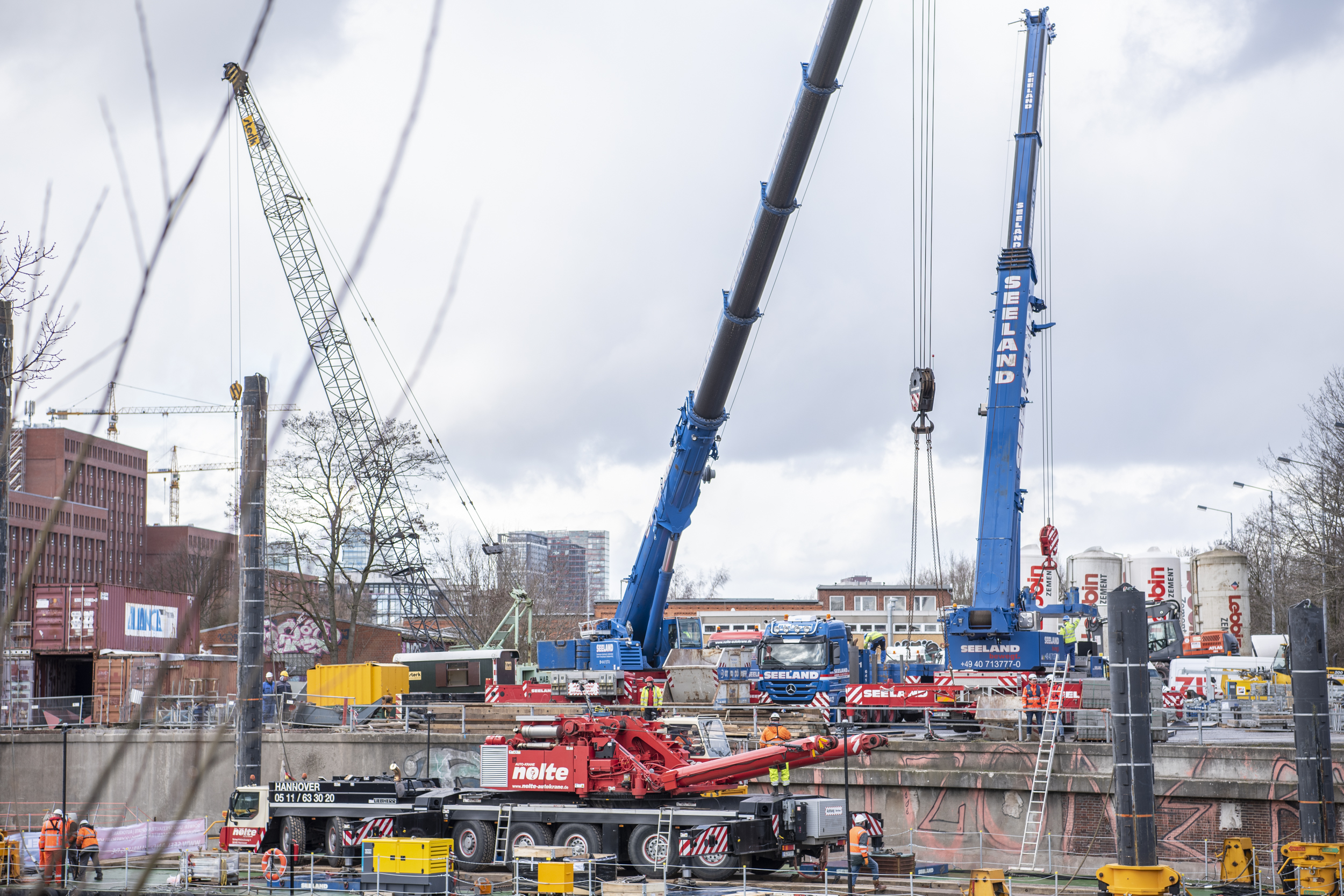 Heavy Lifting for the Construction of the New Bille Bridge

In order to ensure rapid demolition of the 100 years old bridge, the Gustav Seeland Team intends to deploy two special cranes – each with a load-bearing capacity of some 220 metric tons – and a 60-metric ton brake car with a tractive force of 80 metric tons. The lifting mast of the 500-metric ton crane will be assembled on the crane pontoon from dry land. Gustav Seeland will be assigning twelve heavy-goods and assembly specialists, with the requisite expertise, to handle the project.

Relocation of an aircraft segment 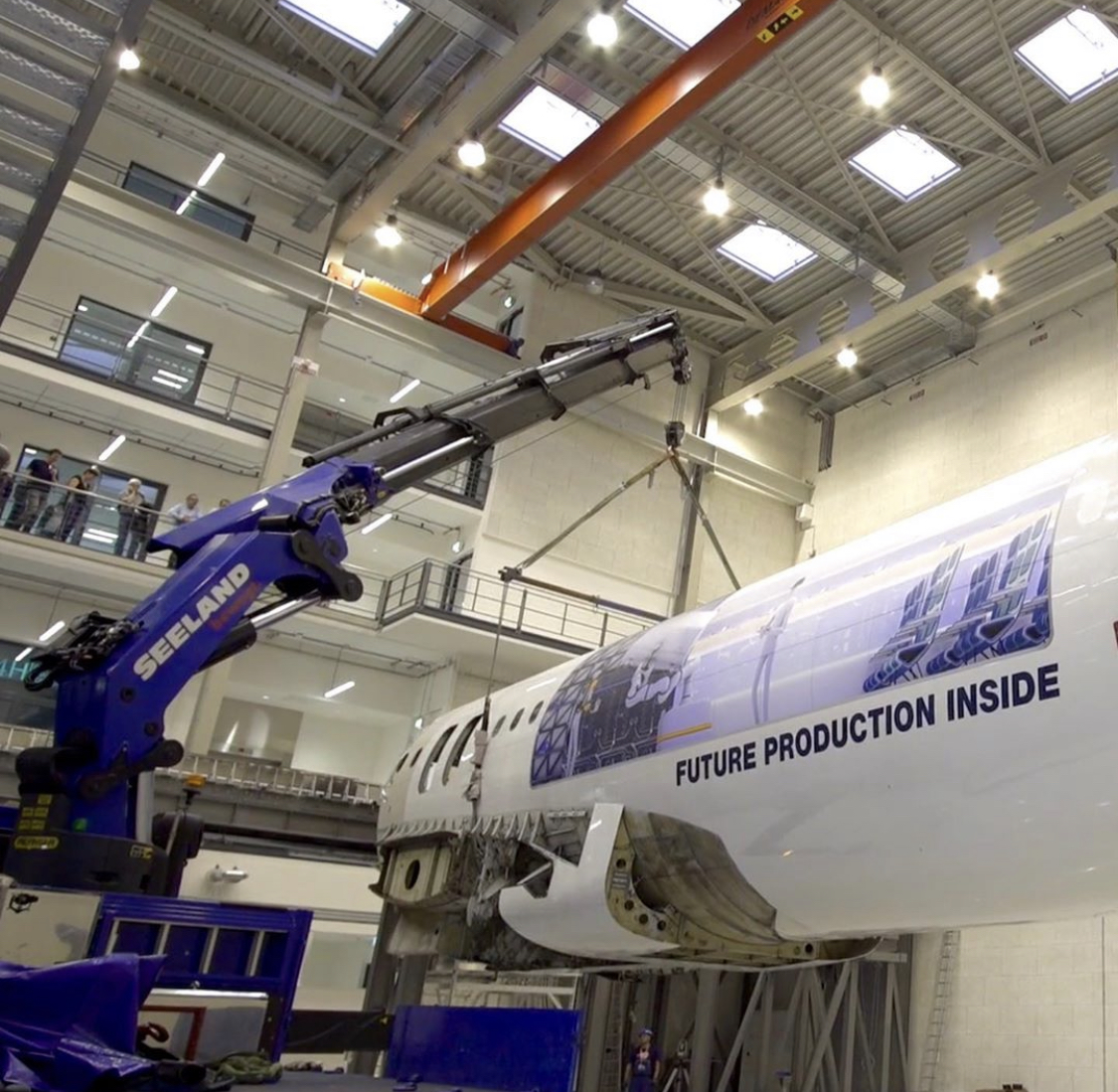 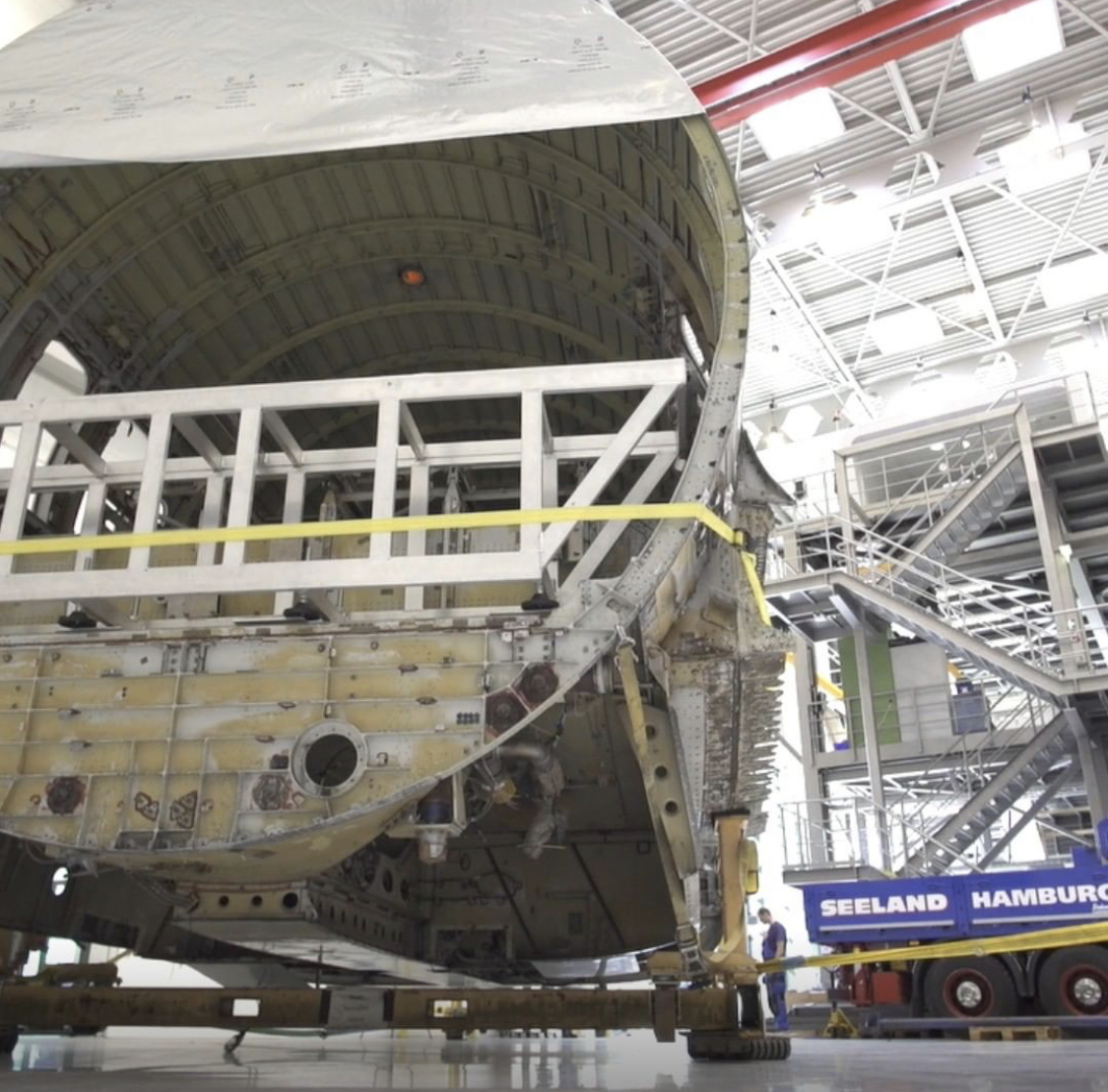 Relocation of an aircraft segment

Precision work was required from the Gustav Seeland Team when relocating a 19 meter long and 9 tons aircraft segment. With the help of the Palfinger "Optimus" (PK92002-SHG with PJ 125E) loading crane, every corner in the hall could be optimally used and guaranteed a safe and quick implementation of the project. 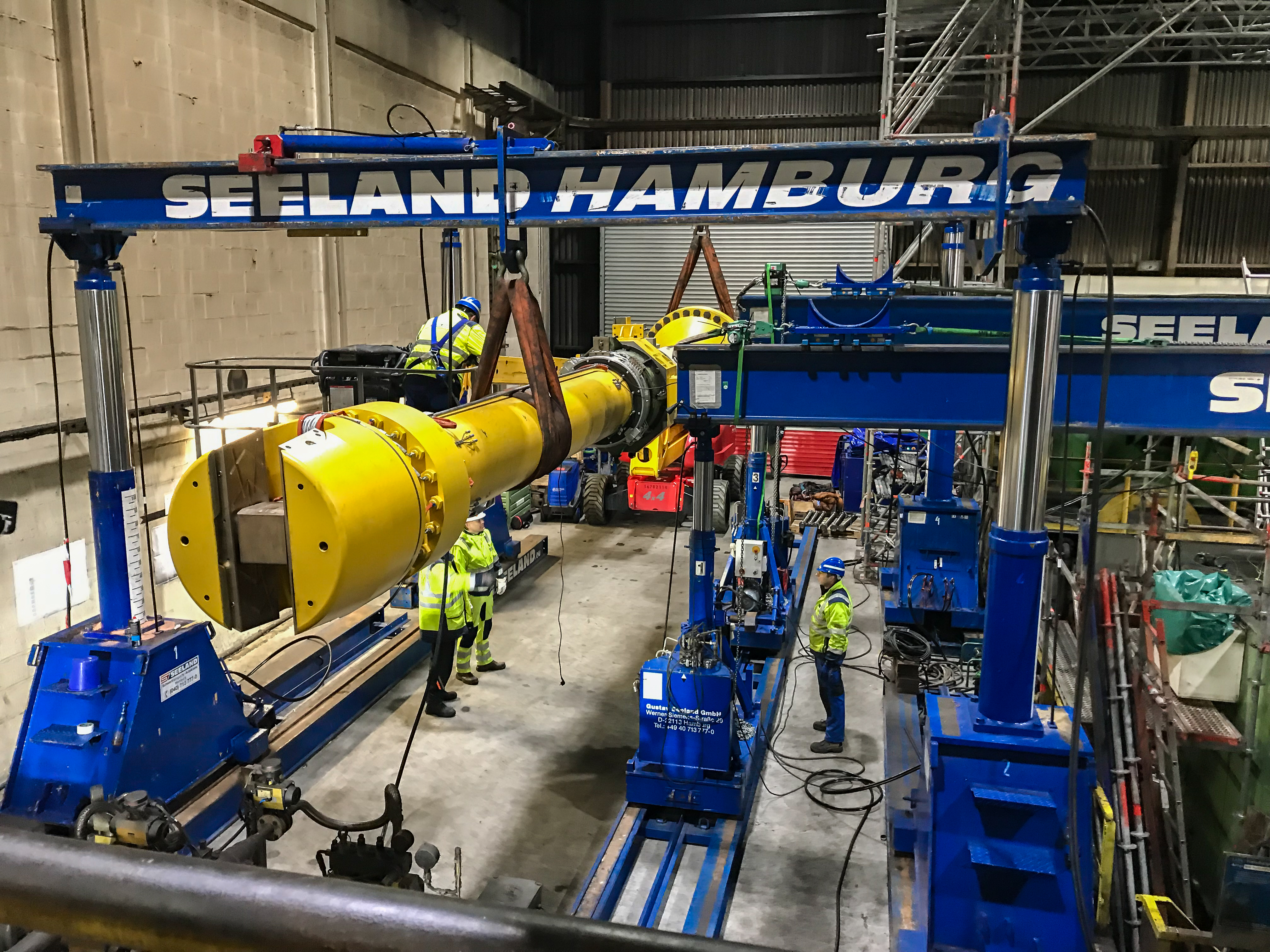 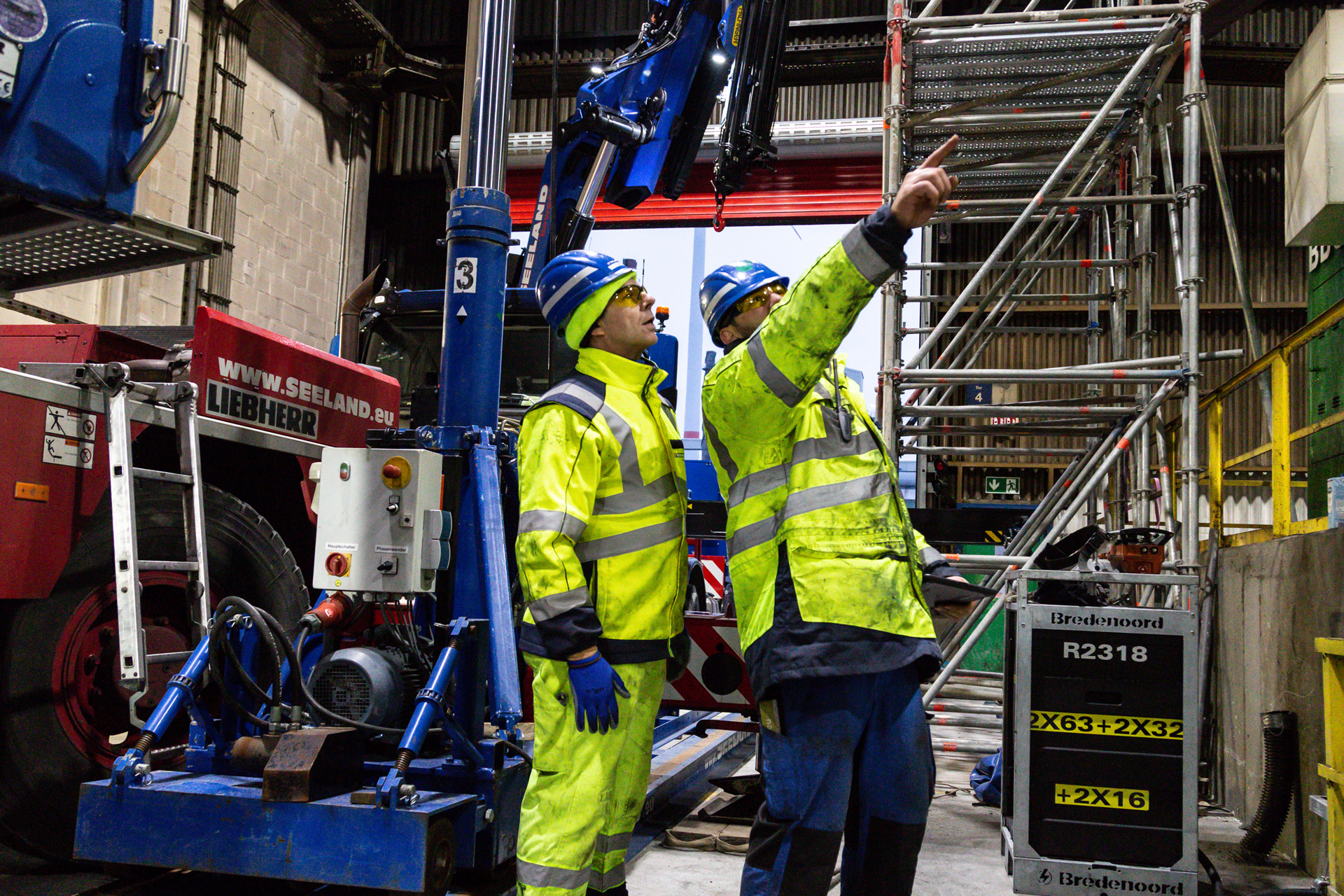 To enable the replacement of two 40-metric-ton driveshafts at an aluminum plant, Gustav Seeland developed a new steel construction during a four-week planning phase, with the size and weight of the transportation equipment and the weight of the driveshafts playing a vital role. Other factors included structural integrity and the limited space available.

In order to handle the project, the company not only deployed the steel construction, but also two masts (360 t, 160 t), a crane traction truck, a 70-metric-ton crane, and a semitrailer with a 6 × 4 Arocs traction unit. 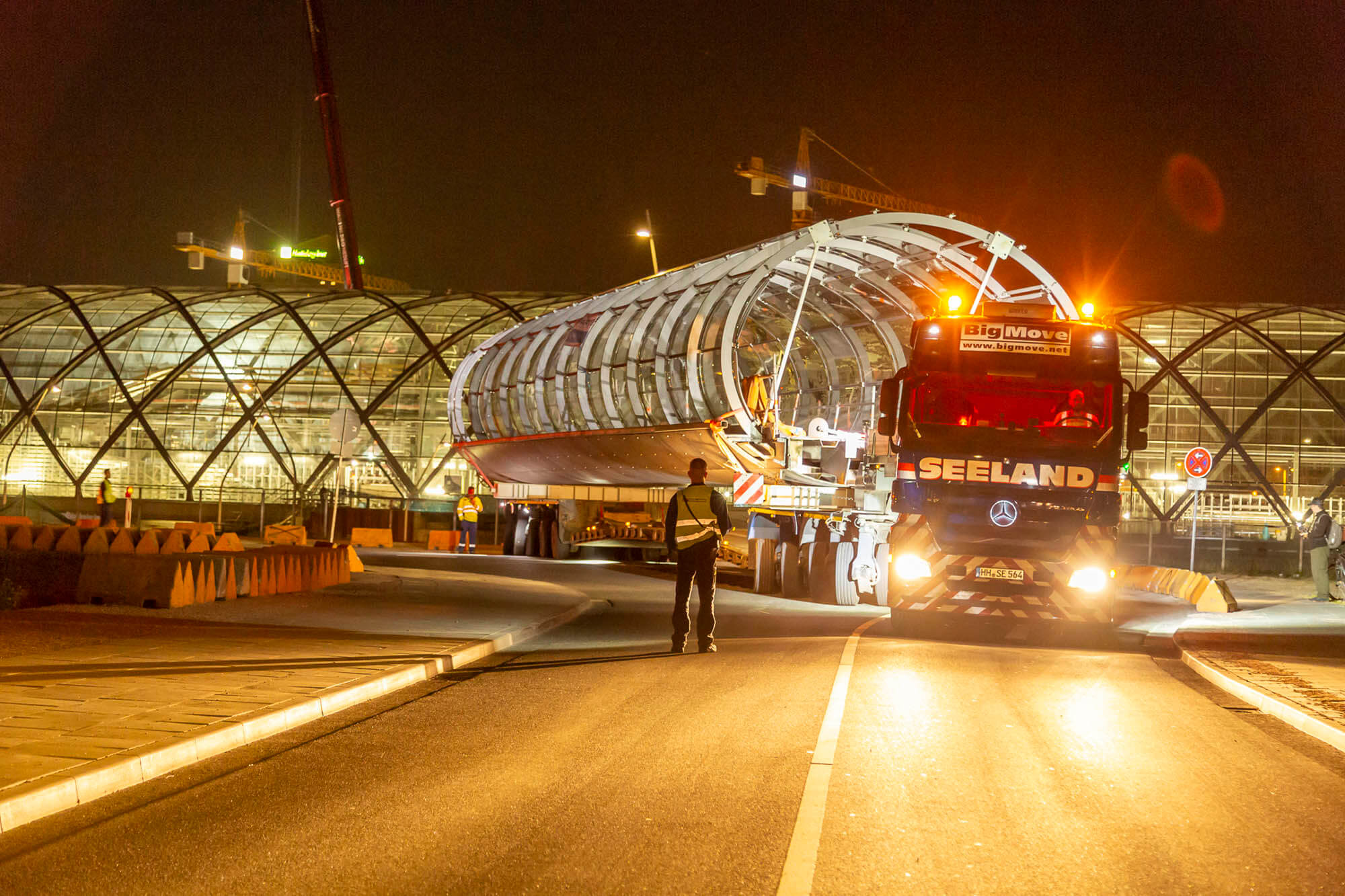 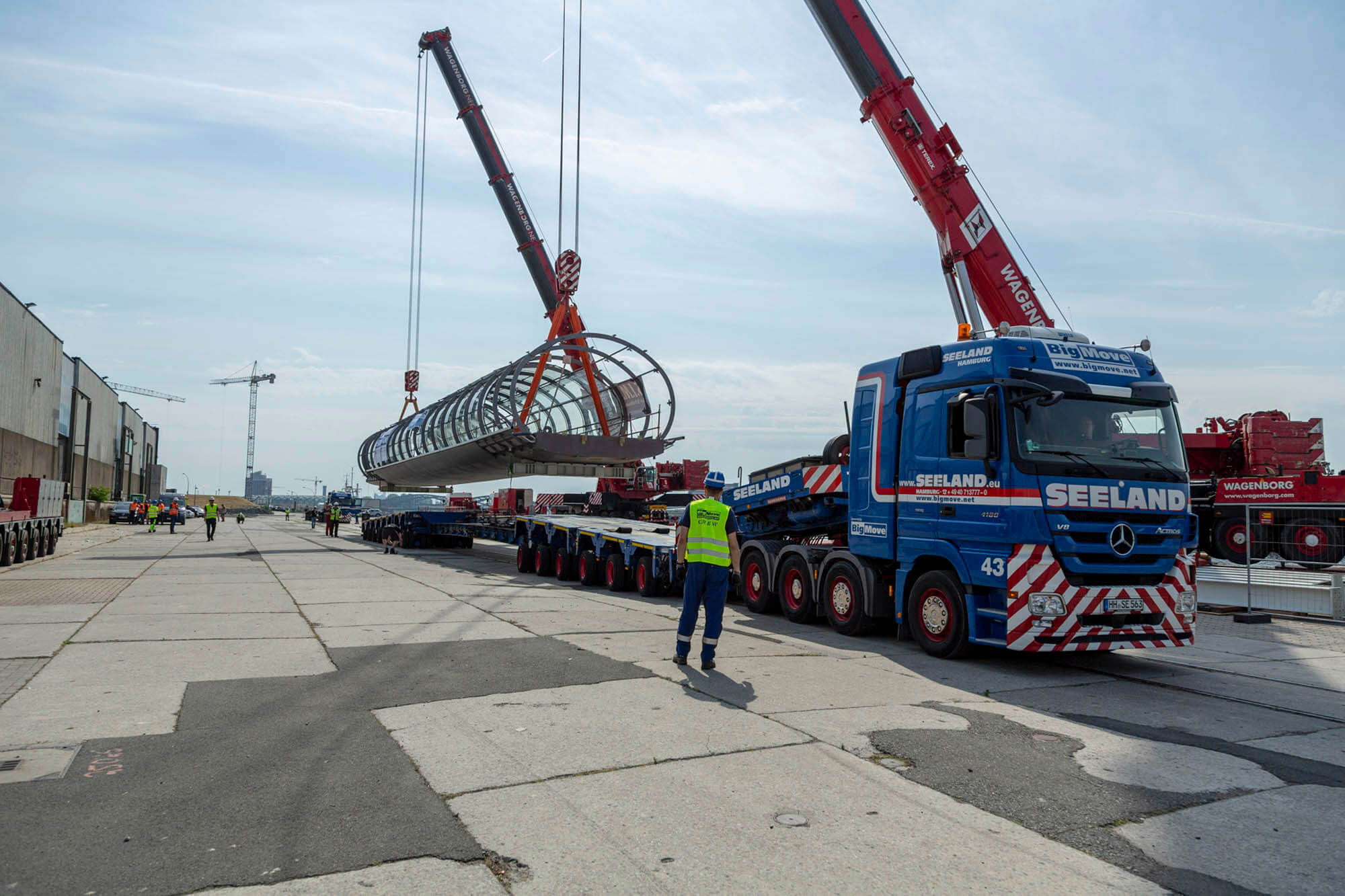 Transport and installation of the new Skywalk U4

Gustav Seeland was contracted with transporting and mounting a new pedestrian bridge in Hamburg. The bridge elements, produced by Lamparter in Hessisch Lichtenau, weigh between 75 and 120 tons each.

The contract of Gustav Seeland comprises everything from planning through to execution of all the logistics services in connection with the bridge project. This includes checking the feasibility, obtaining the necessary permissions, the transport itself, and positioning the bridge elements.

For this, the bridge parts already prepared at Hamburg’s Pella Sietas shipyard will be taken to Baakenhöft on a dock pontoon and then to Elbbrücken on heavy-haulage trailers. Loading will involve a mobile 500-ton crane and 700-ton crane. The transport from Lamparter‘s steelworks in Hessen to Pella Sietas shipyard in Hamburg was already carried out on heavy-haulage trailers by road.

Relocation of the Holsten brewery 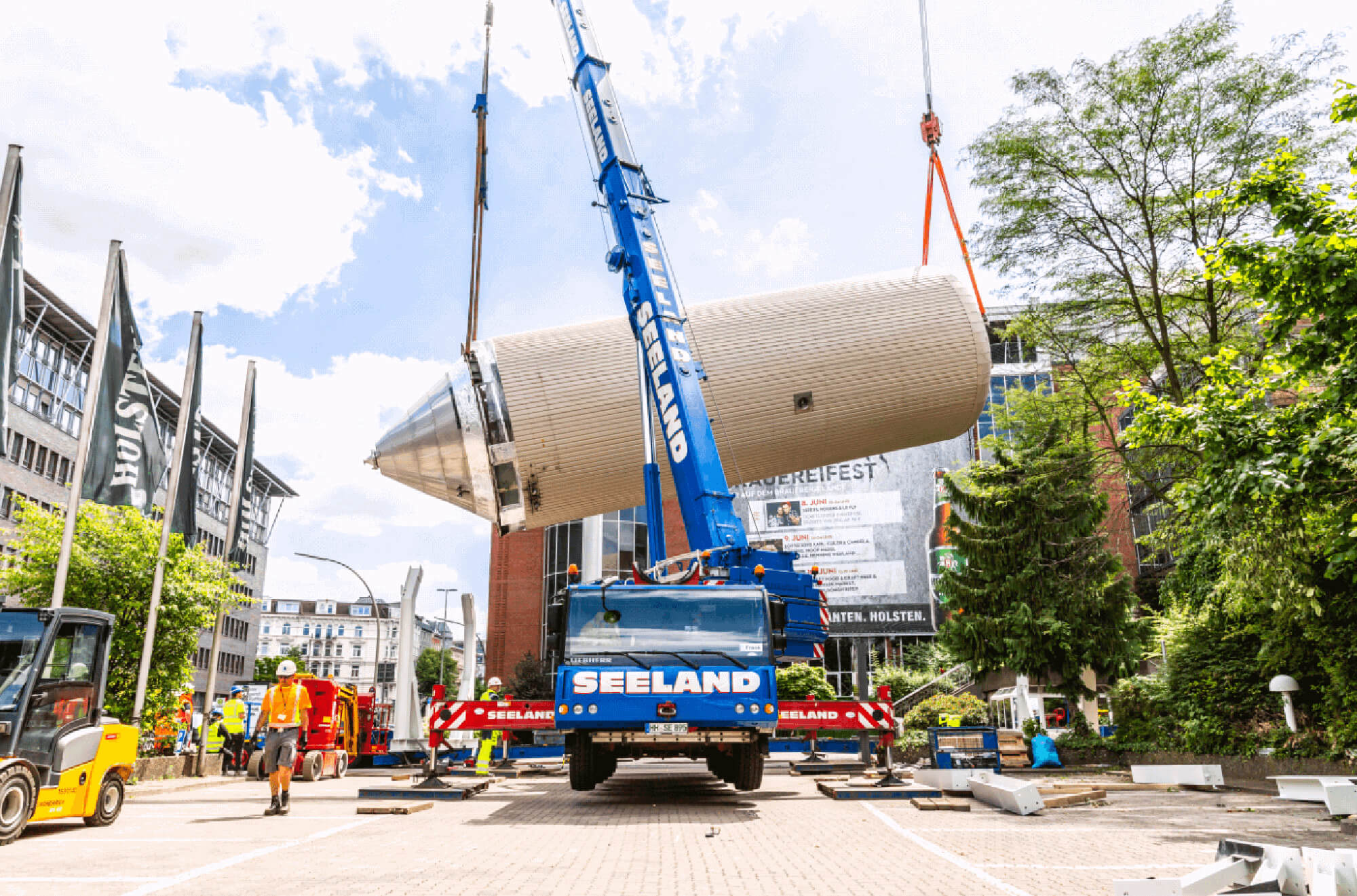 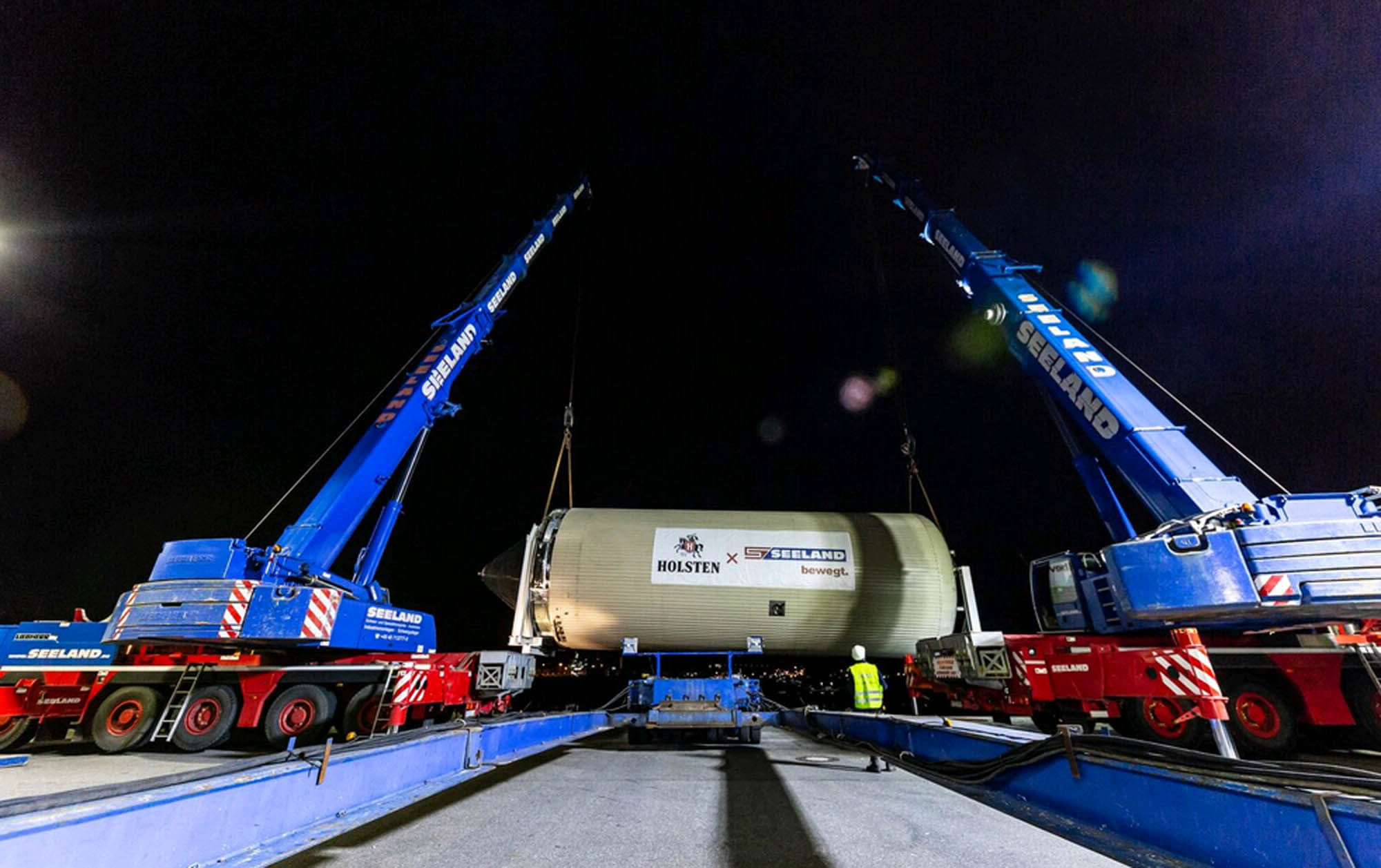 Relocation of the Holsten brewery

The Holsten brewery has commissioned Gustav Seeland to plan and carry out the relocation of fermentation tanks from Atlona to Hausbruch, where regular operation is scheduled to start in April 2019. With a weight of up to 35 tons and a length of up to 24 meters, the tanks contain half a million liters of beer.

Gustav Seeland was responsible for the lifting, loading, transport and intermediate storage of the individual fermentation tanks. The individual tanks were lifted out of the brewery using a 700-ton crane and loaded onto a 40-meter-long low loader. Thanks to the use of the seven-meter-high low-loader, many logistical measures had to be carried out in advance, such as turning traffic lights, pruning trees and setting up extensive road closures.